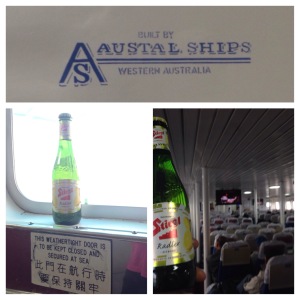 A week’s work in Hong Kong means a weekend visit to China. Staying true to this blog’s origins I chose a city to start with that I could access via ferry. Zhongshan is 90 minutes from Kowloon, crossing the Pearl River Delta and heading up a river. Felt good being in an Australian made boat, but was disappointed not to be allowed outside. Even with the rain and mist it would have been fun.

Named after Sun-Yat Sen’s family name to honour his birth in the city, Zhongshan is a modern city with not much of an old section that I love walking through. There are a couple of pedestrian streets with crumbling facades, but anything old has probably been knocked down. There’s numerous. tributes to Sun-Yat Sen, including a marvellous statue that looks down one of the main treeA few laoweis come to town and a number of the big hotel chains have some huge hotels here. I stayed in tallest – the Hilton, which is relatively cheap for the opulence. For me its highlight is the 59th floor Horizon Bar. If it wasn’t for the ubiquitous mist, the views would be amazing. They still weren’t bad and a Paulaner Hefe is an alright option at 38RMB.

The citizens of Zhongshan gather around the river and there’s a dense pack of KTV venues amongst the restaurants. In amongst the neons, hotels and construction sites is one of Zhongshan’s few bars. Friends Bar and Club has been operating since 1998 and is Westerner owned. One Trip Advisor reviews mentions that one of the owners died of alcohol poisoning, which is taking an occupational hazard too far. Friends in name – not in nature. I must have flies on me this night, because after my first watery Carlsberg, no-one turned up at my elbow to push another my way. RSA? No – NFI more likely. There was a ton of staff and I just wonder if there’s been a change of hands.

Better luck was to be had at the Zhongshan branch of the Guangdong province’s empire of Hooley’s Irish Pubs. There’s three all up. This is a big joint with plenty of TVs with a bloke who actually can find stuff on the hundreds of channels. Next thing I know, I’m watching West Coast v Carlton. The only other time I’ve seen Brewer & Union beer was in Guangzhou at The Brew. Well, they’ve saturated the Guangdong Western bar market as far as I can see with 4 taps on the go and even a tasting paddle. Hooley’s also does a genuine happy hour where it is two for one. That made the 55RMB pint price very tolerable. The menu follows the western bar in China cookie cutter approach (burgers, pizza, pasta, steak). I had two types of wings and one type (Korean) had serious heat.

So that’s Zhongshan ticked off. 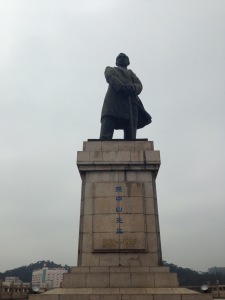 Sent from my iPhone