A Saturday in G’s household is spent watching kid’s sport. Given the hectic schedule, there was not much hope held for any sneaky visits to anything really. Serendipitously, the daughter’s soccer game happened in the suburb next to Torrance – LA’s hotbed of breweries. Logistically a hit and run mission could bridge a small gap between soccer and basketball. 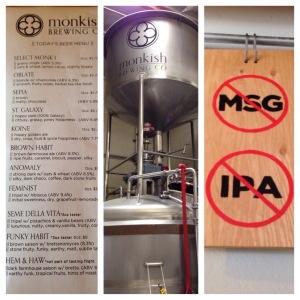 Our ability to hit and run was somewhat stymied by the crowds at brewery we visited. Both venues we saw were packed. Monkish Brewing was being like a kid in lolly shop﻿. 11 brews on tap. Awesome set up with plenty of space in the brewery itself to have a sip. “Beer, Hope, Love” and plenty was being shown. We couldn’t dawdle so after a beautiful brown “Sepia”, we skedaddled.

The Dudes Brewing Co is similar to its Torrances confreres in that it is on an industrial estate. They strongly encourage you to bring your own food along. Quite a twist on BYO. What’s different is the canning machine. Dudes plenty in their colourful, slender 440ml cans. I needed something for a dinner party that night, so opted for two four packs. I was a little irritated at $8 backs a can – but no – $8 per four pack. The happiest of days. ﻿check out their Growler refill prices as well. Great way to breed loyalty. I wince as I think about my first growler fill in Sydney.

One reason the crowds was so healthy at both venues was LA Craft Beer Tours. A big 20 odd seater van were parked out the front of each venue. A﻿ great way to spend a Sunday. Favourite beer at Dudes’ had to be the Grinning Face Porter. I’m a sucker for coconut in any form, and here the addition of toasted coconut is handled really well. 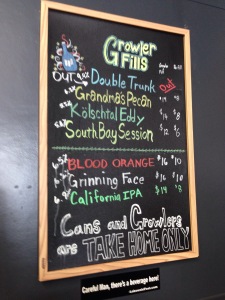 Now the range of beers in the US is just crazy. Not just the breadth of Brewers, but also the types. One of the weirdest beers I’ve seen over the years was one from the delightfully named Belching Beaver Brewery. This relatively new brewery is based in San Diego and produces an eclectic range of core beers including a Peanut Butter Flavoured Milk Stout. You know what? This actually worked. You wouldn’t want too many of these. It’s rich but smooth and not gimmicky.