Son has a school history project to complete when we get back to Oz. He decided the topic would be the Roman Baths. A trip round the Baths with audio guide was required and we learnt all about Aquae Sulis and the Roman goddess Sulis Minerva. 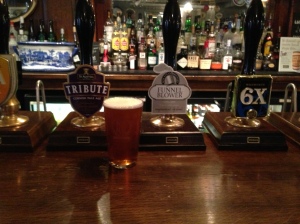 After the trip we went to the nearby Westgate pub for lunch. On the beer front there are plenty of cask strong ciders which caught the eye, but not wanting anything to strong I picked the St. Austell Tribute Cornish Pale Ale (4.2%). A very easy drinking beer, you could easily have a few of these, a very good session beer. The pub itself dates back to 1677 and was originally a coach inn, it now has a modern decor, larger interior than you would expect and friendly staff. The pub has a reasonable food menu, a large array of different lagers, beers and strong ciders; being close to the Baths there was a mixture of tourists and locals.

The following day spent I time chasing trout on boat in Blagdon Lake, in the Mendip Hills, with my brother. Weather has been mild on this trip home but on this day the wind was a bit raw and from the east (summer wind usually from the south west). It was hard work on the oars but we managed to eek out six trout all around 2-3lb, mainly on floating lines, nymphs and I managed 3 on dry flies, a claret fly called Bobs Bits. With family and friends already stocked up with trout, we stopped off on the way home at the Winford Arms. I have blogged this before but we managed to exchange trout for beers. I chose one of my favourite beers the Bath Gem Ale. I expect Blagdon Trout will be on the specials board. 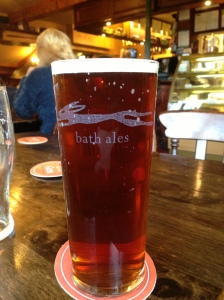 This is my final blog for this UK trip, one of my favourite pubs is the Hunters Rest which is a great country pub with favourite beers and ciders on tap. I have been playing around with the iphone camera, not sure how the panorama shot looks but here it is anyway. Whilst typing this up I have just watched some TV footage of Sydney and the Naval festival, weather looks good and will back at work (great!) and on the back of the ferry shortly.