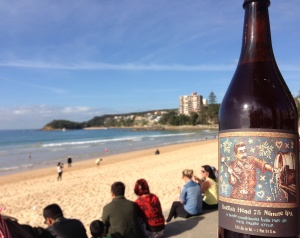 Nothing stays the same in Manly, which is a bloody good thing. The latest change is the incorporation of the Phoenix Chinese restaurant into the Hotel Steyne. It is all part of a Manly shuffle, where the site where the Manly Phoenix restaurant sits is going to be taken over by Justin Hemmes’ Merivale group. The Phoenix in the Steyne will open its doors on 2 July 2013, and according to the Manly Daily, a Latin American bar and restaurant will open in November 2013. In the meantime, the Rubber Duckie Taphouse continues its transformation under new management with an announcement of weekly events, including crab racing and trivia nights. Lastly, a new alternative to the late night lamb sandwich in the Corso has emerged with Doggfathers selling American themed hot doggies from the smallest hole in the wall I’ve seen in a long time. 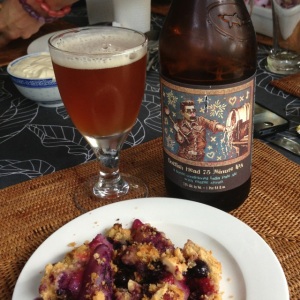 As good as it is that the Hotel Steyne is able to cram in yet another venue within the site, I was initially underwhelmed by the selection of the Phoenix as the option. I’ve kind of had the Phoenix on a black ban ever since we had a Yum Cha there a couple of years ago and needed an overdraft to pay for it. The final straw was seeing tea listed on the bill times 5 and amongst our 5 was a three year old. Point 1, since when is tea charged for at Yum Cha and Point 2 a tea drinking three year old? Hotel Steyne though is running an interesting awareness campaign for their new addition by turning an entry to the pub into ” Phoenix Dumpling Lane” and selling steamed dumplings from 5pm. 5 dumplings for $10 until they run out and they are simply divine. Fluffy pork buns, dim sum, prawn and pork gow gee and those spinach and chive ones – steaming hot and with plenty of chilli sauce on the side. Maybe its time for the black ban to end (but only at the Hotel Steyne). 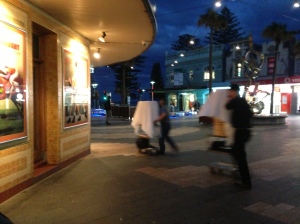 Today’s totally unrelated beer story is courtesy of Rachel and Linda with another of their bounty from the US getting a run. Dogfish Head 75 Minute IPA is a pretty rare beer in the US, let alone in Australia. It’s one of Dogfish Head’s “occasional rarities” and is a combination of their flagship 60 minute and 90 minute IPAs. Maple syrup is added and then “carbonated naturally”. The whole minute thingy in the name relates to how long the wort is boiled. I shared this with felloe correspondent illiards and the consensus was that this was a fine beer. Despite the 7.5% alcohol and the fact that this was an American IPA, it was surprisingly mellow. The presence of the maple syrup had taken the squinting edge off, but there was still plenty of warming depth. Love these 750ml bottles for sharing.

Hole in the Wall 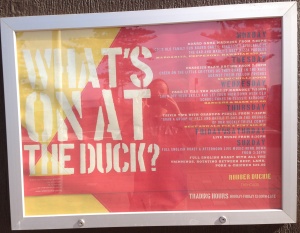 What’s on at the Duck?