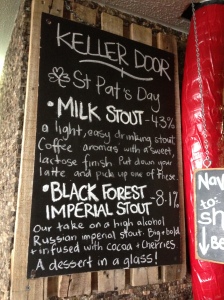 4 Pines Brewing are certainly making maximum use of their new brewing facilities at Brookvale. Since the start of the year, I reckon they’ve released 7 beers in their Keller Door series. In fact they’ve released so many beers since they opened that it is getting blody hard to find the latest beer on Untappd, because the list is so long. In keeping with tradition, 4 Pines is again marking St.Patrick’s day with a couple of new stouts to go along with their award-winning regular stout (renamed Dry Irish Stout for the occasion, and occasionally known as Space Beer). 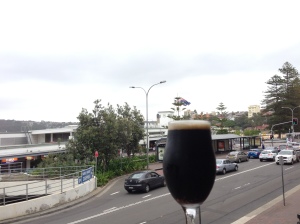 Their two new stouts are both crackers. The first is a Milk Stout, which is very British in that it is mild in alcohol, but I reckon it tastes quite Australian in that it was quite dry and roasty. I didn’t get the “sweet lactose” finish, but thought it ended with a pleasant crisp bitterness. The coffee aroma makes it a pleasure to smell, whilst drinking. It’s been some time since I gave a beer 5 on Untappd, but the Black Forest Imperial Stout was a worthy recipient. From sniff to sip to swallow, this is an end to end winner. The aroma is spirituous and head-spinning, the sip is complex, rich and unctuous (a good way, not a Christopher Pyne way) and the after taste delivers the promised cherry effect. Not sure how many pubs around town will get a crack at this, but if you can to Manly to try this – it will be worth your while. Truly a Black Forest cake in a glass. Hides its high alcohol content well. 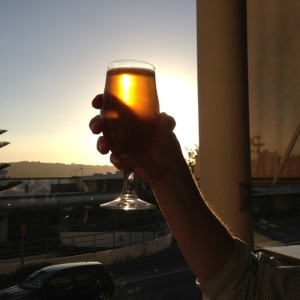 As has previously been mentioned on this blog, 4 Pines love celebrating National Days and this year has already seen Waitangi Day and St. David’s Day marked with a special beer. The NZ Pale Ale that was made for that day was probably my favourite 4 Pines one-off this year (until the Black Forest Imperial Porter that is). The Welsh Ale was also very enjoyable. It’d fair to say that the day that 4 Pines staff goes off on more than any other is St Patrick’s Day and this year they’ve decided to party for 4 days from today to St. Patrick’s Day itself on Sunday. I’m looking forward to see all and sundry in green on Sunday (wear something Irish and get a free pint!). 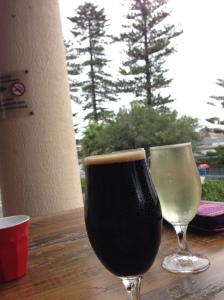 In addition to the National Series, 4 Pines also did their second(?) series of single hop beers. This is a great initiative, though not unique, and enables drinkers to try different hop varieties. illiards and I tried the set on launch and ranked the three in a completely different order. Beer preference is truly a personal thing. The thing about the Keller Door series is that they generally don’t last very long – so if you want to have a crack at the special stouts – get your skates on. 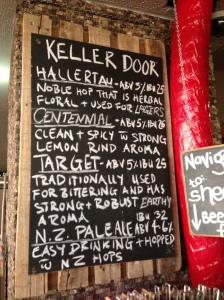