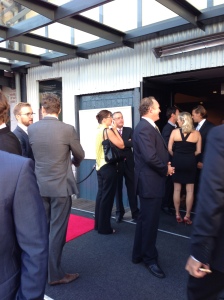 Yes, the headline is a classic BotF non sequitur. The beer has nothing to do with the event and weren’t even had on the same day – but my BotF rule is that every post references a new beer. The Surfing Australia Awards night was many things, but it wasn’t likely to turn up a beer untried on the Back of the Ferry. More on Cobra later, but first to the Surfing Australia Awards night. This correspondent is not a surfer (despite some feeble attempts), but I love surfing. Whether it is swimming out the back with mates that do surf, reading Tracks, uni surf trips, reading biographies of surfers or simply watching surfing – it is something I’ve admired closely for many, many years. I was delighted then to cop a bait to the annual Surfing Australia Awards night, which coincided with their 50 year celebration and most importantly the announcement of Australia’s 10 Most Influential Surfers since 1963. Throw in a Hall of Fame induction – and it was going to be a great night.

Have an awards night, and there’s bound to be a pollie lurking here and there. No exception on this night. Julia Gillard appeared on the tellie and gave a good natured but daggy speech about the importance of surfing and then tied that into climate change. Wayne Swan, whose had a fair share of political wipeouts of late actually spoke with some surfing cred and generated some rare (for him) bon homie. They’re a tolerant lot, the surfing crowd, and they good naturedly accepted the politcal intrusion on their evening and also tolerated blokes like my mate getting their photos taken with them. Stephanie Gilmour is a great surfer and an extremely nice person to boot. Just being around so many legends made the night. I heard of the amazing Peter Drouyn story, but to actually see his alter-(New)-ego Westerly Windina made that quite hard to believe story quite real. 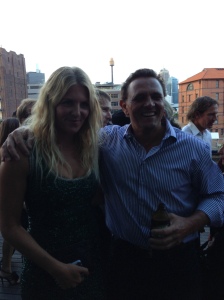 Whilst it was terrific to see all the annual awards doled out (photographer, film, waterman etc), and especially pleasing to hear from 2 present world champions – (the extremely humble Parko and Steph), I was really keen to hear the countdown of the 10 most influential surfers. The criteria was “The Australian surfer who through their surfing and wider contribution has had the most profound influence on the national character of Australian surfing”. I thought that this criteria might have excluded a couple of the greatest surfers and meant that some blokes like George Greenough or Mark Warren might have snuck in, but in the end the final 10 was probably fair enough. Judging by the standing ovation that greeted Mark Richards when he climbed the stage – no-one was complaining about his designation as the most influential Australian surfer of the last 50 years. For the record, the 10 were Bob McTavish (shortboard pioneer, but ironically my longboard mates ride McTavish boards), Mark Occhilupo, Wayne Bartholomew, Layne Beachley, Tom Carroll, Midget Farrelly, Michael Peterson, Nat Young, Simon Anderson and Mark Richards. We’ve written about Michael Peterson before on this blog and it was touching to see his remarkable mother, with whom he lived for the last 30 years of his life, accept the award with untold glee. The common features of all the speeches was the humility with which the awards were received and the respect that all recipients had for eachother.

This mutual respect was demonstrated when all the surfing Hall of Famers present gathered on stage to welcome the latest inductee into their midst. A big night for Stephanie Gilmour was capped off by making the Surfing Hall of Fame (fair enough – 5 World Championships). A very cool moment was when she acknowledged the presence of the world’s first World Champion (men or women) – Phyllis O’Donnell – who was on stage with probably at least 25 fellow Hall-of-Famers including Westerly Windina and Ross Clarke-Jones. Just seeing that crowd of legends in the one place was good enough for me.

Not even Collaroy’s most influential surfer

Cobra Premium Beer has an odd history. It was founded by an Indian entrepreneur named Karan Bilimoria, who has since become an English Lord. He wanted a beer that went better with curry, which apparently means it needed to be less gassy. It’s made in India but found fame in England. Maybe not enough fame, because it ended up in some financial strife and is now majority owned by Molson Coors, though Lord Bilimoria is still well and truly involved. Cobra’s nothing special, but perfectly potable and would probably be well suited to a lager/curry frenzy. Nice bottle.

Cobra Beer and the Europa