Australia might be a big country, but it is relatively flat, which means it is pretty (relatively) easy to climb its highest “mountain”. Mount Kosciuszko, which is the bump above the bottle top of the FIGJAM IPA, stands 2,228m. To “climb” it, you get a cable car from Thredbo, which takes you to 1937m and then you walk 6.5km to the peak. It’s a relatively benign walk and the distance would be much shorter point to point, but it means unfit blokes and small children can make the ascent. The day we made the walk was brilliant. Clear blue skies and a pleasant 16 degrees. Mount Kosciuszko was named by its first European ascender, who was Polish. He named it for the Polish hero, Tadeuz Kosciuszko. The summit reminded Strzelecki of Kosciuszko’s memorial mound in Krakow. Luckily iPhones offer short cuts in Settings, and I don’t have to type out Kosciuszko each time.

Once on top, it’s pretty relaxing. On a clear day the views are terrific and even in the middle of summer the occasional snowdrift is hanging around. Everyone queues up for a photo next to or on the small cairn that marks the high point. It was at this point I cracked my longneck of FIGJAM IPA, Burleigh Brewing‘s take on a cranked up US version of an IPA. Delicious. Apparently made with 5 different hops, it’s a big, chewy mouthful. Really nice lingering bitterness. Not one to slam down after a long walk, but a great way to commemorate another Beer Grylls moment. One of BotF’s offspring chose a different way to mark her ascent.

About 2.7kms from the peak is an emergency shelter known as Seaman’s Hut. It was built in 1929 by a father to commemorate his son who deceased nearby in a blizzard. It is still stocked with firewood and has a small stove. On a day like the one we had yesterday, it just looks great. Imagine how good it would look if you came across if you were lost. 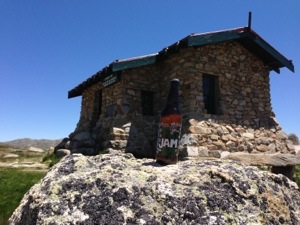