Weather last Tuesday was a little bit better, it was not raining and the sun was doing its best to show. Decided myself and son would fish Manningford Trout Fishery

Manningford trout fishery is situated near the village of Pewsey in Wiltshire. The lake is fed by the chalk stream, river Avon, which runs from nearby Salisbury plain. Salisbury plain is home to a number of military bases and the distant rumbling of artillery guns was very audible in the afternoon.  I have fished this lake many times before, it is a picturesque and the water is gin clear. Fishing is not too difficult and it is often a matter of trying not to catch, a good place for a day out and a young fly fisherman.

A walk round the bank, we spotted a pod of rainbow trout, hare’s ear nymph on 8lb tippet and floating line soon had their attention and the fish were charging towards the fly. We pulled fly quickly away, decided we would look for something bigger. Kept walking the bank, plenty of casting practice and we hook up, not a big one but a short fight and 1st fish is on the bank. The ticket we had was to catch a limit of 3 fish, and we ended with the best trout being 3 ½ lb (with two others about 2lb each). All flies seemed to interest the trout, but nymphs, hare’s ears, green damsel and black buzzers were the pick.

That evening visited the Coronation Tap (Cori tap) in Clifton for a couple of jars with my brother.  This pub is famous, at least in

Bristol, not sure why we had not visited in quite a few years, as it has a great atmosphere and unique range of ciders.   Clifton is one of the oldest parts of Bristol with a lot of Georgian and earlier period architecture. This pub dates back to the 1700’s, close to the Down’s (a large common land area in the centre Bristol) and is a favourite with locals and students (Clifton is in the heart of student land) .  A venue for bands, Chris Jagger(Mick’s brother) was playing later on, but we were not hanging round. On to the beers, a  number of real ales including Bath Gem Ale and good range of ciders, with my favourite’s Thatchers Traditional on tap – described on the board as the 1904 recipe, hazy and uncarbonated. There is also a cider, the Exhibition which is only available at the Cori Tap. The barman told me this cider is also from 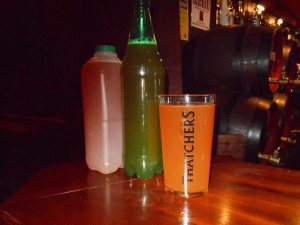 Thatchers brewery and is sold in half pints as its strength is 8.4%.

A couple of ciders and we each decided to take a couple of pints of Thatchers home, filled from the keg, and for me unique carry out vessels (recycled plastic bottles, but I am not complaining).