This correspondent’s latest trip to Melbourne took me to a part of Melbourne that I’ve never really been to be before. I had to attend a conference at the Park Hyatt near the Victorian State Parliament House. I stayed at my regular hotel on South Wharf and took the opportunity to walk along the Yarra as far as the Yarra Pedestrain Bridge (which is the one beyond the Sandridge Rail Bridge as you head East along the Yarra). When you cross this bridge you go over the top of one of the funkier bars I’ve been/seen for awhile.

Ponyfish Island exists literally under the bridge. I don’t how much of island previously existed, but whatever there was has been utilised brilliantly. The photography is schizenhausen, but they’ve wrapped seating all around the perimeter of the island and then put some benches in the middle as well. Directly under the bridge is a bar and kitchen that looks and feels very Mexican cantinaesque. Very impressive. I didn’t stay long and didn’t get a look at the menu, but the drinks were eclectic. I would have launched into a longneck of Abbotsfod Invalid Stout, but I had a long evening in front of me – so I opted for a simple Matilda Bay Bohemian Pilsner. I’ll be visiting again – but despite feeling very underpierced, won’t be subjecting myself to any needles before hand.

Ponyfish Island from the bridge

After a better than average conference dinner (Coopers Dark all night), a couple of attendees were keen to have a cigar. I wasn’t up for that, but when the guy rated the bar as one of the best – I tagged along. He was a bloody good judge this fella. The entrance is modest and anonymous. A heavy wooden door opens to a flight of stairs that leads to a wonderfully old fashioned and well appointed lounge/bar/dining room where the Eastern wall consists of a wonderful round window. I would have lingered longer, but my colleagues were keen for their cigar – which we were able to enjoy on one of the better roof-tops bars I’ve been too (up another flight of stairs). The chill was taken away by an array of mushroom gas heaters and the view across to the golden lit parliament house was brilliant. In trying to find a link to their website (there isn’t one), I noted that this place tends to polarise because of price and service. No dramas – I wasn’t paying and the staff answered any question – and met any request.

The view from the Melbourne Supper Club

Now apparently this place does a pretty good wine list (that’ll be for others to judge) and their cigar and spirit collection looked comprehensive. I didn’t, however expect to find 1) a beer I’d never seen before and 2) a beer that wasn’t on the @Untappd database. Hix Beer comes from the intriguingly named Hickinbotham of Dromana. Dromana is a town on the Mornington Peninsula and is home to a number of vineyards. The Hickinbothams are 3rd generation winemakers, who decided to get a bloke to brew some beer to serve in their restaurant at the vineyard. The whole back story can be found here – and is well told by Rick Besserdin. There’s a few varieties available, including a pilsner, a brown ale and what I was able to try – the Pale Ale. This was a beautiful beer. The first went very quickly and the second was also quaffed enthusiastically by my buddies who eschewed their whiskey for my beer. A light, honeyed but wonderfully bitter beer. Looks like I’ll be heading to Dromana soon. 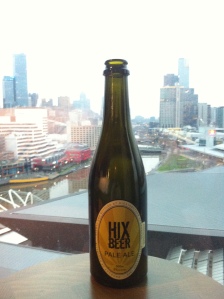