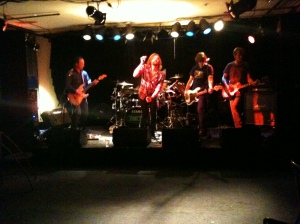 In all the years I hung around or lived in the Glorious Inner West, for what ever reason I never made it to The Sandringham Hotel. After having rectified that situation on Thursday night, I just can’t work out why this was. It is just a great inner-city pub. Little wonder the Whitlams wrote a song entitled “God Drinks at the Sando”. According to my mate Steve, who with me on the night, it’s had some renovations over the years. Steve played in a band called Belljar in the late ’80s and early ’90s and often performed at the Sandringham. There’s a large central bar with 3 counters and you can watch live music both upstairs and downstairs. There’s food options, but there’s no dramas if you want to pop into the classic burger shop next door. 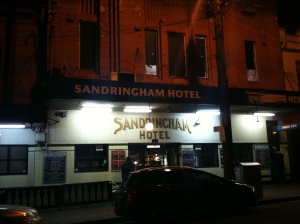 In Sydney, there’s not many places like the Sandringham that have entertainment options 7 days a week. It’s always been about the music at the Sando, and it’s been a place to play when you are starting out as a band. You can see from the photo that the outside is looking a little tired, but you could actually achieve that look in painting classes that dominated inner west house renovations in the ’90s. I reckon it looks fine, and it will be a much shorter gap between visits. 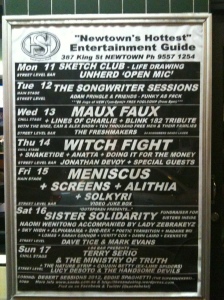 Back on the Bill

The reason for being at the Sando was to see Back of the Ferry’s favourite band – Snaketide. The boys have been quiet of late, but hardly idle. They’ve been putting plenty of work into recording an E.P. (a term that is still relevant even though there’s not a record needle in sight), and working in yet another bass player. This correspondent is a member of what is becoming a Queenesque sized club of former bass players of Snaketide – but their latest is a good ‘un. Snaketide have as good a rhythm section as any band (though Muzza’s that good a drummer even me and Muzza could be regarded as a solid rhythm section) and it provides a great foundation for the rest of the band. Ben and Ken are terrifically complementary as guitarists and have developed a fine sound and more hooks than Robson Green’s tackle box. Myles was in strong voice and they’ve improved all their songs and added some new ones. Keep an eye out for Snaketide on Facebook and we’ll provide some info on the EP. 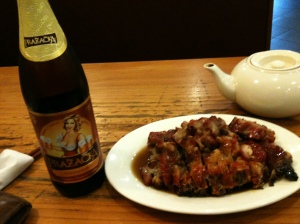 The unrelated beer story is unusual. It is very rare to discover a beer in a suburban bottle shop that you can’t find on either the @Untappd or the Beer Advocate database, but that is what happened to me with this 500ml bottle of Pražačka. It was lurking in a fridge at the back of a bottlo on Victoria Rd, Chatswood. $3.50 for a 500ml – 4% “Ceske Pivo” or “Light Beer”. After plenty of hunting around, I was able to find a Russian website for Pražačka. What I can ascertain is that Pražačka is a beer brewed in the Czech Republic exclusively for Russian consumption (hence the Russian website). It ranks as seventh in imported beers to Russia by volume. It sounds a little like Hooten beer being manufactured in Holland, purely for Australian consumption. Well, it’s not longer exclusive to the Russians as we Aussies can get it from a little bottlo in Chatswood. What’s it like? It’s a very malty Euro lager – potable – but not one to go out of your way to travel to Chatswood for. 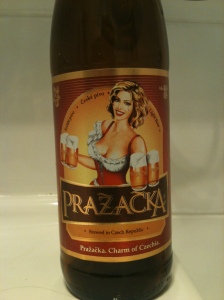