Last Sunday saw this correspondent on the sun dappled back deck of fellow correspondent – illiards. Sydney had turned on a great Sunday on the last week-end of Autumn and illiards decided to turn the hospitality and his barbecue. The least I could do was raid The Cantina’s fridge for a few uniques to sample. We were joined by the always loquacious Fergus – whose appeared more than once on these pages. 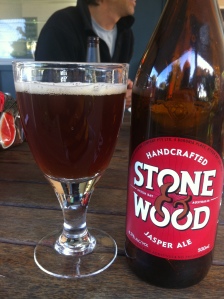 Another winner from Stone & Wood

First cab off the rank was the latest offering from Stone & Wood. If this doesn’t finish in the top 20 of Hottest 100 beers contest in 2013 – then I’m a poor judge. This is a ripper in all respects. The colour is particularly fine. According to beer label hyperbole, the colour is reminiscent of the red volcanic soil of the Byron Bay hinterland. The boys are well read, because “Jasper” means “a compact, opaque, cryptocrystalline variety of quartz, usually colored red” – didn’t know that!. This is a beer to be savoured. It’s wonderfully malty, almost earthy to start with a subtle but growing hoppy finish at the end. I’ve seen this on tap as well, and I hope that this gets into more than a few pubs. Could be a go-to beer. In sort of related trivia, the team name for the Manhattan College is the Jaspers. They’re named after Brother Jasper – a legendary figure from their early days – who is credited with creating baseball’s 7th inning stretch – there you go. 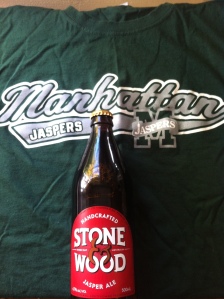 The second beer we tried was a collaboration that has been one of the stars of the Australian twitterverse lately. The Gypsy and the Goat is made by Mountain Goat and Mikkel Borg Bjergsø of the “gypsy” brewery Mikkeller. Mikkeller is an idol of world brewing. There is no brewery – they just brew with other people. This drop is an outstanding collaboration – a black pepperberry IPA, which is intense from head to toe. The colour is an opaque black, black. There’s a wonderful spice to the sip, but it is the bitterness that is the king. I had it with a steak, and the pepper in the beer compliments the meat well. One to snaffle if you can.

The last @untappd newbie was one from a range of Schneider Weisse beers that has infiltrated Vintage Cellars recently. The website indicates that there are at least 8 varieties and Vintage is stocking at least 3 of them. “Tap 1” is a vibrant, fragrant wheat beer. The colour is awesome and as the sun set over the insular peninsula, this wheat beer lit up like an orange. It is a really fine example of a wheat beer with plenty of fizz and aroma. Better in summer, but not bad for an autumn day. 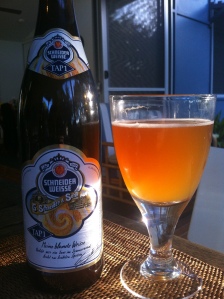 As orange as an orange