Another quick fire trip home to Wellington for some official business and a catch-up with the whanau just happened to coincide with a Canes v Crusaders Super Rugby match up at the cake tin – you little beauty!

It was also a perfect opportunity to make a debut visit to another one of Wellington’s relatively new boutique beer venues – The Little Beer Quarter. I’d read about this place and also follow it on social media without having set foot in the place – there you go folks, social media’s pulling power is real, believe the hype!

Wellington’s thirst for small boutique venues as opposed to big commercial “gotta be seen at” bars and clubs has seen some award winning classy watering holes pop up. The Little Beer Quarter falls into this category. Situated in a city laneway (ala Melbourne) the LBQ is an absolute gem. There’s no screaming signage begging you to come in. 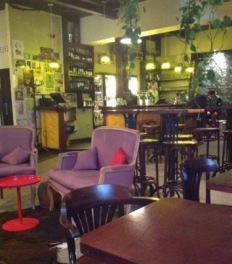 LBQ - a fantastic boutique beer venue in Wellington with a beer menu that will have craft beer lovers in heaven.

LBQ’s beer menu will have lovers of craft beer salivating!

The drop of choice this time was a Perfection Pale Ale from kiwi craft brewery Renaissance (I think this is a unique beer review for Botf – has Renaissance appeared before?). The brewery is situated in the heart of Marlborough wine country. Their website proclaims:

“We produce top end, ultra premium ales that enlighten the palate and thrill the senses. Our beers are made from the pure waters that flow from the southern alps”

This goes some way to explain the classy looking bottle that at first glance could be mistaken for a port. The other beauty of the bottle is that its 500ml!

The Renaissance Perfection Pale Ale is packed to the rafters with taste. It’s a classic English style pale ale with a very strong nutty and toffey taste. Its appearance is very creamy like – I can see this drop going down a treat in an old English pub in the middle of winter. I loved the fruity and nutty taste. It went down a treaty with a selection of LQB’s tasting plates. The beef skewers I could come back for anytime! 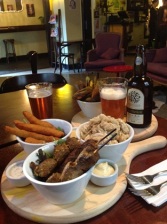 Piri Weepu, Andrew Hore, Hosea Gear, Aaron Cruden, Ma’a Nonu – not a bad bunch of rugby players you would have thought. Not so according to the new Canes coach Mark Hammett. There was public outrage in Wellington when the Hammer axed all these star players and opted for a young inexperienced side. I’ll put my hand up to confess I was one of those Wellingtonians voicing outrage.

“If we have a bad year, they’ll get rid of Hammett and then Ma’a and Piri will come back”

These were just some of the lines I was blurting out when all the news broke on the Canes fiasco late last year.

Wow! The Canes and the Hammer defied all predications of being S15 cellar dwellers by putting on a decent showing so far. TJ Peranara, Beauden Barrett, Tm Bateman – some of the no names who have restored public faith in the Canes franchise and have allowed the Hammer to walk the streets of Wellington safely (although, they have dropped off after back to back losses).

This correspondent jumped at the chance of seeing his beloved Canes take on the Crusaders who can field names such as Carter, Read, Franks x2, Whitelock and Dagg. An added bonus for being in attendance was to applaud Dan Carter as he jogged out alone for his 100th game for the Crusaders.

A good old NZ rugby derby can’t be beaten (although visiting the cake tin in the evening for a professional game is a far cry from sitting in the Millard Stand at Athletic Park in a howling southerly and driving rain at 2.30pm). 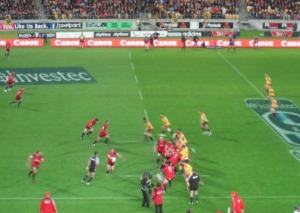 Andy Ellis puts up a box kick from a lineout win

Anyway, despite the 42-14 flogging the Crusaders dished out, it was a pleasure to visit the tin with devoted Canes fans.

Thanks Wellington for another great few days, each time I am blown away by your character and ever changing face. One of these trips I probably won’t leave…….