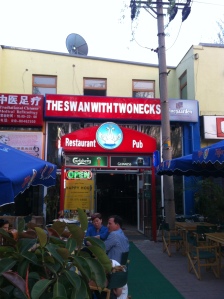 The Swan with Two Necks

This correspondent is now safely ensconsed with our permanent Beijing correspondent, Tony from Toowoomba, in the expat enclave of Shunyi, which is to the North East of Beijing outside the 5th Ring Road. With the Pomegranate pub now rubble, and King’s Bar undergoing renovation, the only place left to drink this far north is the Swan with Two Necks. Pat, who ran the Pomegranate, has opened a new bar further south, still in Expatville, and we’ll be gracing that for the trivia quiz on Thursday night. 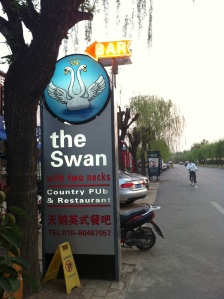 There’s something quite evocative about the name, and I reckon it should be made into a t-shirt. As you can tell from the picture below, it is hardly a country pub (I’m not sure if they were trying to appeal to the large UK and Irish contingent), but change the description to “Sports Bar and you’ve nailed it. The sports gear that adorns the walls is from a number of different sports and they’ll show anything (which they kinda have to do, given the wide variety of clientele). Super 15 Rugby, 6 Nations Rugby, International Rugby, college basketball, all leagues of Soccer/Football, Australian rugby league. If it’s round or oval and bounces it’ll be on at the Swan with Two Necks. The beer selection is mediocre, but that’s not the main game here. It’s about volume of grog, food and sport. Happy hour is 30% off beers between 4 and 8pm Monday to Thursday, which means a pint of Carlsberg or Tiger is $2.70. 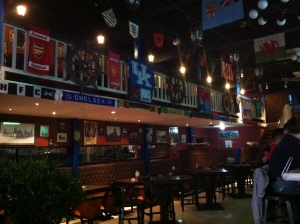 We had a feed with Mrs TfT and our respective kids. The pubs in China are pretty liberal with kids being around and sometimes you wonder if the menus cater to them as opposed to adults. To be honest, the food was pretty bland. The kids liked their burgers and cheese smothered fries, but we were underwhelmed with our Chicken Kiev and Buffalo Wing salad, but this joint isn’t going to thrive on being cordon-bleu.

We needed a feed, because we’d been stomping around Tiananmen Square and the Great Hall of the People all day. Always impressive, the spectacle of Tiananmen was enhanced by the sight of a policeman on a Segway. As intriguing a sight as a policeman is on a Segway is the presence of an iconic US beer being available everywhere in China. Pabst Blue Ribbon just screams working man USA, yet here it is in tall cans in mamy bottleshops and convenience stores. It’s about 60 cents a can and is made in China. There’s plenty of these 400ml tins around and the logo and name for Blue Cowrie had me intrigued. The contents didn’t however. 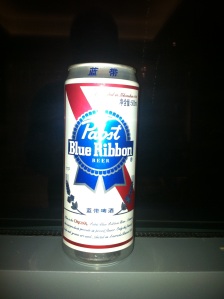 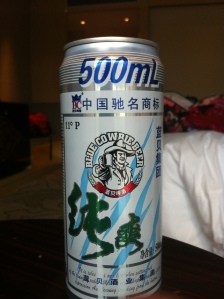