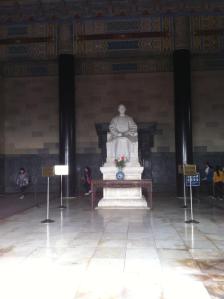 A few cities have been China’s capital over the years. Nanjing’s had at least two turns and as a result it has plenty to see. One of the highlights is the Sun Yat-Sen Mausoleum. In the complex history of China in the late 19th and early 20th centuries, Sun Yat-Sen is a stand out as both the Taiwanese and mainland Chinese recognise him as a legend. I simply couldn’t believe how many Chinese were at the Mausoleum on a weekday to pay their respects. It’s an awesome structure, with a long tree lined boulevard leading to a steep 392 step climb to the mausoleum, where the big fella lies. 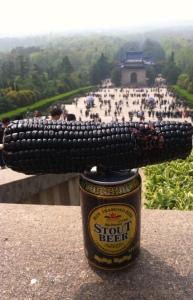 With any Chinese monument there’s an array of stalls selling everything from trinkets to food to beer. I saw two things I hadn’t seen before – black corn and Blue Diamond Stout. Both are pretty ordinary. The black corn was pretty dry and flavourless – a tough chew. The Blue Diamond Stout beer smelt promising but poured like coke and had as much body as a feather. One to avoid.