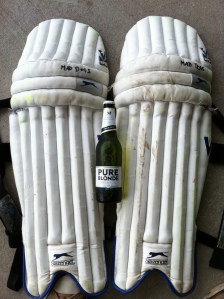 A little over a year ago today, your correspondent wrote about an annual cricket match in which he and illards are regular participants. The match is between a highly organised bunch of Englishmen called the MadDogs (they have monogrammed shirts and everything) and a rag tag bunch of Aussies many of whom meet each other for the first time at the coin toss. At the conclusion of the 2011 version, the result of 9 games is 4 wins to the MadDogs, 4 wins to the Aussies and 1 no result. There’s subsequently been another wash-out – so the result of this contest would determine dominance.

Not the winning score

For bladdamasta and illiards, the Ashes is the one of cricket we play a year, and with our respective athletic primes (and that’s debatable) being longer and longer ago – the effects two days after the conclusion of the match are getting more and more pronounced. One of these days we’ll learn not to stick our hands up to be wicket-keeper and opening bowler respectively. The Aussies (well a couple anyway), batted very solidly and managed to amass 245 from 35 overs. A newcomer (who will be signed to a long term contract) blasted 82 included 24 off one offer. Your correspondent flailed in hope more than science and scratched out 16 runs – but others were in finer form including our Captain whose play was surprising given his nocturnal activities the evening prior.

The MadDogs started well and based on recent matches looked to have the depth to come home easily, but then, despite the lack of a scorching midday sun lost all commonsense and suffered 4 run outs. It must be said that the Aussies fielded ridiculously well and took catches that ordinarily would have been grassed and hitting stumps from all parts of the ground. Illiards, then bladdamasta runout hapless MadDogs in consecutive deliveries. So – ultimately a comfortable win by 56 runs and all is right in the world with the Ashes in their rightful Antipodean Place.

Given my pre-game nocturnal activities, I’d forgotten to pack some special beers for the obligatory beer porn. The Alan Davidson Oval proved to be a great venue and had a large very cold fridge full of beer that was paid for by way of an honesty box. Whilst the weather wasn’t as hot as previous years – it was still pretty steamy. This isn’t surprising as Sydney’s atmospere is more liquid than air at the moment. So after flailing or keeping for any period of time – it is not a time to be fussy about beer choice. That’s lucky because the Alan Davidson Oval fridge offered two varities – VB or Pure Blonde. I’ve got to say that if there was ever a time to drink Pure Blonde – it was then. Ice cold – its bland inoffensiveness slides down very easily and took the edge off very quickly.