I now appreciate the pressure that James Pattinson, Doug Bracewell, Ed Cowan and Sonny Bill Williams have felt recently – making their debuts on the big stage.

As I make my debut botf post, I can feel the pressure now that I have joined illustrious company such as bladdamasta, illiards, pommy_ch et al in the botf dynasty. With a click of a button, I could be dispatched faster than a Chris Martin long hop.

Kiwisinoz also has the honour of posting the first ever botf blog from Aotearoa (that’s NZ)…..

A nation’s capital – I bet you’re thinking of a city full of public servants clocking in at 9 and leaving at 5pm on the dot, wearing brown socks and carrying their 1970’s briefcase in a place whose night life doesn’t have a lot to offer….am I right?

Wellington is NZ’s capital and is far from the image you’ve just conjured up in your mind. In fact Lonely Planet dubbed it the world’s coolest capital city. The New York Times also gave it a great write up for the yanks.  To cut to the chase for botf’s Australian readership, Wellington is NZ’s equivalent to Melbourne – it has a plethora of small boutique bars and restaurants, it’s an arts & cultural hub, the people are content, and well……it’s often damn freezing, with the added pleasure of the fierce wind.

The day started with breakfast at Maranui Café.  Located in the Lyall Bay surf clubrooms, it has fast become a Wellington icon, famous for its glorious food served whilst enjoying a breathtaking view of Lyall Bay beach and the entrance to Wellington harbour. A must for any tourist to Wellington are Maranui’s brekkie options – the perfect cure for a session the night before.

Too windy? Great views from inside Maranui Cafe

Let’s get to the beer section of this debut post before the selectors start to wield the axe. An Epic Lager was downed for the first time by this correspondent, while Mrs kiwisinoz downed (in a more civilised manner) a Scotts Gluten Free Pale Ale (I can hear the groans already….but read on before judging).

Firstly, the venue that these liquid refreshments were critiqued at – The Malthouse.  This is a craft beer lover’s paradise! Wall to wall fridges and taps full of NZ craft beer (and cider). If you’re looking for a standard Henie, Stenie, or DB Export, don’t even bother setting foot in this place. Botf correspondents would think they’d died and gone to heaven. As a born and bred Wellingtonian, I used to frequent The Malthouse in years gone by (before the “in oz” suffix was obtained) when it was located on Willis Street. Now in the hustle and bustle of Courtney Place it is far more accessible.

The Malthouse has stood on the gold medal podium for 2 years running, picking up Best Bar Venue and Best Beer Menu – need I say more botf correspondents and readers?!?! It would be criminal not to come here. 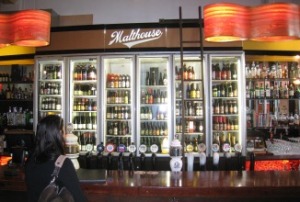 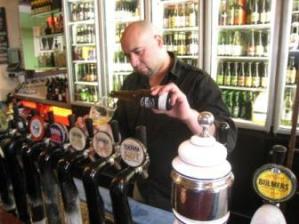 To the beer – the Epic Lager is something else! The first few sips were like the Sydney NYE fireworks going off in my mouth. Extremely hoppy all the way through, it’s the wholesome flavour that grabs you like Guptil grabbing a Phil Hughes nick. It definitely got my attention.

It took a few sips to get accustomed to the wholesome full body hoppy taste, but after that it was extremely pleasurable on the palate. Some beers start to lose their flavour towards the end and even give a strange after taste, Epic is not in this category. The last gulp was just as good as the first.

There is no doubting why this beer is called Epic, nothing better describes it than its name. In the words of bladdamaster, this drop is very sessionable.

At 5%, this beer would also go down well with a seafood platter or you could skip the platter and Danny would be there to either pass you another Epic or dazzle you with another Kiwi craft beer.

Mrs kiwisinoz tried a Scotts Gluten Free Pale Ale – I can see the eyes rolling at the sheer mention of gluten free beer but don’t let that turn you off trying this immensely pleasurable pale ale. From the picture, there is nothing hippie or alternative about the bottle, making it quite an acceptable drop to drink with your mates without letting on its gluten free.

The mrs prefers to ensure food is always consumed whilst drinking, she reckons this drop is best enjoyed with a smoked chicken salad or light pizza.

For those who prefer gluten free food and drink (whether it be personal choice or medical reasons), Scotts Gluten Free Pale Ale makes for a healthy alternative without sacrificing flavour or quality.

It’s smooth on the palate making it perfect for a cheeky lunch time beer. The sweetness of honey is subtle on the palate yet balanced with a slight bitter after taste to warrant another:

“Hey Danny, get us another Scotts bro”

“Yip, sweet as, told ya the missus would ike it aye!”

Therein ends the debut, next post from the Bay of Islands. KiwisinOz