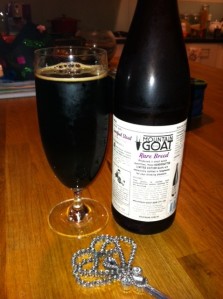 There’s nothing quite like the thrill of seeing the appearance of another Rare Breed from the Mountain Goat team appear all of a sudden in the fridge at my local bottl-o, tucked away in a corner. This time it was the Surefoot Stout. More on this in a tick. First my curmudgeonly rant.

While I was busy browsing the interweb I came across an article claiming “Sydney’s George St rated in world’s top shopping spots“. I could not believe it. It could not have been ‘rated’ by anyone who has actually been to George St. For those who are familiar with Sydney’s main thoroughfare also know that it’s famous (notorious) for it’s trashing souvenir shops, takeaway food chains and gridlock traffic.

A quote from the article states “…It made the cut because of its friendly department stores and brightly lit boutiques, along with quirky shops at the southern end and top-end fashion stores and cafes in the Queen Victoria building“. I reckon these muppets did not leave the Queen Victoria building. As for “quirky shops at the southern end”…..south of Market St has to be one of the most execrable parts of the city. It’s pretty much melange of cinema complexes, trashy bars and subterranean internet cafes (who actually uses these anymore?). At least 20 years ago it had army surplus stores every 50 metres (remember those?!) and it was worth a visit.

As for being rated one of the world’s top shopping thoroughfares..bollocks.

Now for something far more pleasant. The Surefoot Stout is an all-too-rare Rare Breed beer from Mountain Goat Beer. It was great drinking and as black as the ace of spades. Held to the light not a photon got through. It tasted beautifully smooth with a hint of coffee and a slight roasted flavour. There was no after taste bitterness. More please.