A number of the BotF crew are on or have been on the road. We are looking forward to another fortnight of tales of the travels of pommy_ch in England. Meanwhile, bladdamasta and illiards spent a couple of days in the bush 30 odd k’s to the west of Rylstone in New South Wales. This part of New South Wales is not as rich in breweries and pubs as Bristol and its surrounds, so we had to bring up some uniques to try. 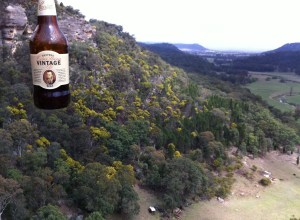 We stayed at a wonderful place called Franks Breakaway Farmstay. Two roomy farmhouses (we stayed in one) are surrounded by 180 degrees of impressive rocky escarpments and sit on a farm of about 600 acres that backs onto the Wollemi National Park near Dunn’s Swamp. As soon as I set eyes on these wonderful stone outcrops from which gum trees seem to sprout, I knew we had to climb them. So two adults and three kids (11, 10 and 7) set out on Sunday morning to get to the top – how we didn’t know. We worked our way up a slope of gumtrees, banksias and
boulders before reaching a series of cliffs. By scrambling through some gaps, we were able to get up and behind some of the outcrops and eventually get to top.

Now in the interests of good beerporn, I’d smuggled a bottle of Coopers Extra Strong Vintage Ale (2010) in my bag and as I set up the shot my daughter said – “Hey, Dad – you could be Beer Grills”. Not a bad little sideline for Back of the Ferry. Climb something and drink a beer on the summit – Beer Grills. This little adventure was not as tough as the original Beer Grills trip – Mount Gower on Lord Howe – where I thought I was going to die, but there were some hairy moments. We followed a ridge upwards for quite some way and were rewarded with amazing views of Nullo Mountain and a series of Pagoda/Beehive rock formations that look pretty cool.

So, to Beer Grills rules. Some part of the ascent or must be done by walking. There’s got to be an end or summit of the walk that has panoramic views. Photograph a beer (unique to BotF) and if you like a photo of yourself consuming that beer. There are marks for ruggedness, but I’m sure we’ll fluidly determine more criteria as time goes by. Knowing BotF contributors – I expect Beer Grills to be a very occasional category.

Well, was it worth carrying a stubbie of Coopers Extra Stong Vintage Ale (2010) on this trek? Absolutely. I love the fact that Australia’s largest brewery can take the time and trouble to produce annually such a fine beer. This a rich and rewarding sipper. There’s a warming spirit like texture to this beer. Malty and fruity and not one for sculling. On one hand, a fizzy lager that you rip the top off and pour half of it down your front might be the appropriate bevvy to celebrate an ascent. On the other hand, it had started to get a little nippy on the exposed stone, so the warming qualities of the Coopers were quite welcome. Looking well forward to my next one.

One of them is Nullo Mountain