A brewer that makes beautifully packaged beers is Shepherd Neame from Kent in the UK. A couple of their offerings have made their way to Australian bottleshops and they’ve all been worth drinking. Fortunately, they are generally full flavoured and deserving of a long, lingering drink because at $8 a stubbie – this isn’t a 6 packer or something that can become a regular habit. Other varieties you may have seen include the delightfully named “Bishop’s Finger” aka a Nun’s Best Friend (not my nickname) and 1698, a beer launched to celebrate the brewer’s tercentenary 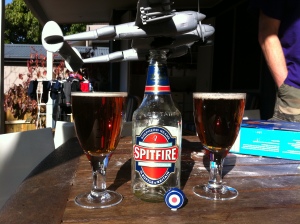 Spitfire not with a Spitfire

Shepherd Neame claims to be Britain’s Oldest Brewer and has probably earned the right to name one of its beers after a very famous symbol of British pride – the Spitfire. This beer was developed in 1990 to celebrate the 50th anniversary of the Battle of Britain, one of the key moments of World War II and a massive turning point about which Briton’s are justifiably proud. I reckon appropriate the name to call Spitfire “The Bottle of Britain” is half weak Boom Tish humour and half faintly disrespectful, but I guess when you donate some of the proceeds to RAF Benevolent Fund and produce such a superb beer you can get away with it. This is a fine beer, lovingly made. From its coppery hue, to its long lasting bitter, yet rich fruity taste – it is simply a pleasure to drink. Very cool bottle and cap.

The beerporn that supports today’s post is deliberately wrong. Students of warplanes will quickly recognise that the plane perched on the bottle of Spitfire is a model of a Lightning. When setting up beerporn, you use what is close at hand. In a way the photo reminds me of an infrequently updated but always amusing twitter account called Beer Glassphemy or @BeerGlassphemy. Quite simply, a branded beer glass is filled with the contents of a different brand of beer and the result is photographed and tweeted.