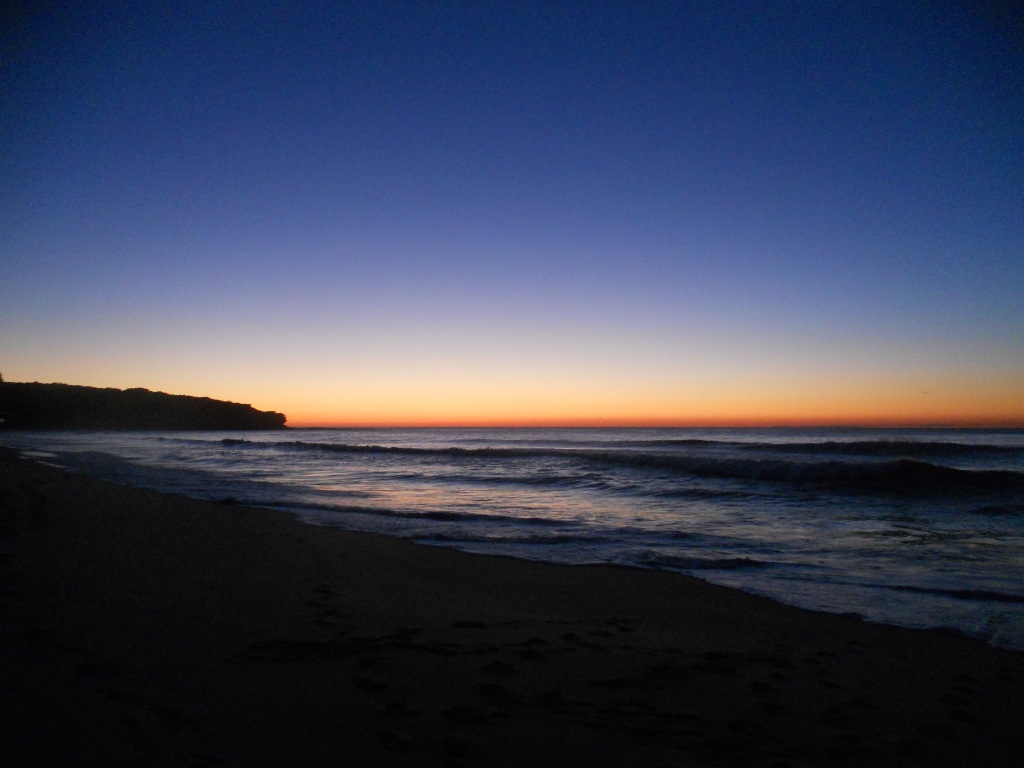 Great weather last weekend with a small swell and gentle offshore north westerly winds, it would have been ideal for fishing offshore in the kayak.

I had the day off on Friday, but all my plans went out of the window when the car broke down Thursday night on the way home from work having been picked up by the trouble and strife from the Manly ferry … fortunately we managed to limp it home, stopped 3 times though. Turned out to be the radiator had a hole in it and the car was over heating … so the day off was spent getting the car to the garage and sorting out a hire car for the weekend.

Opportunities for fishing were limited to early Saturday morning, late Saturday afternoon/evening and Sunday morning. The usual kids sport duties with League on Saturday and Union on Sunday. The fish of the month was whiting …… but was not confident of catching one, particularly when the proprietor of Narrabeen Bait and Tackle didn’t think there were many about when buying some bait for the weekend foray. Winter tends to have fewer but larger whiting on the beaches.

So Saturday morning headed down to Curly beach to favourite spot just after 5am, had the beach to myself until about 6’ish, and watched a magnificent sun rise. Fishing wise I setup 2 rods both with pulley rigs, 1’0 hook and half a pillie for bait.. and cast out into the gutter about 60-70 yards from the shore …… 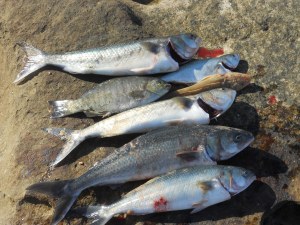 Initially a few bumping bites on the rod tip resulted in a lone tailor … but as the sun came up, the salmon had woken from their slumber, the bites were a lot more vigourous thumping the rod over. About every 20 minutes one of the rods would violently be pulled over as a salmon picked up the bait and tore off. 4 Salmon later the sun was well up, there were a few surfers out and about, although the swell was tiny. Thought about hanging around to get but my bag limit of salmon, but the bite had slowed down a bit and there was now plenty of traffic walking up and down the beach. A couple of small flathead rounded of the session and was back home by 7.30am.

After the league, took my son for surf down at Curly … strange conditions with small waves coming in and small waves being refracted back of the beach. Decided would have a quick fish before dark on Saturday near Flat Rock for blackfish. Very little cabbage after the big swells but managed to get 1 blackfish but also missed a couple of downs …… float fishing for blackfish is definitely a bit of art.

On Sunday after the son’s rugby union had one last shot at the fish of the month, a whiting … a single rod set up with a running ledger and some frozen beach worm, I roamed the gutters of Collaroy and Curly beach to catch one undersized flathead.

Down to the club for the weigh in at 3.30pm – turned out I came first (and last) in the rock and beach section. There was about 10 or so other members weighing in for the offshore section – a number of nice snapper, flathead and trevors (trevally) hit the scales. No one managed to catch a whiting. A BBQ, a few Bulmers rounded off the afternoon.

With no work the next day, went down to the Hilton for a couple of beers that evening (1 or 2 Manly footy players, a Channel 9 footy pundit were also on the scene). The Hilton has already been reviewed.

With no work on Monday with the August Bank holiday and having done all the domestic chores, a quick fish off the rocks for squid at dusk saw 1 of my favourite squid jigs being donated to Davey Jones’s locker and 1 small arrow squid which will be bait for a future beach fishing session