Ed Hardy Premium Lager is another beer that is poorly named. It is simply far from premium. This correspondent wouldn’t be seen dead wearing most Ed Hardy clothing and this will be the last I’ll be drinking his beer. It is not undrinkable, but there are plenty of better ways to drop $16 (for a 6 pack – and I couldn’t buy a single). It’s pretty watery, and has little body or aroma. A hot day beer only. This strange addition to bottle-shop shelves is imported by Frost Boutique Breweries & Imports. It is made by Cervecaria Mexicana, which despite making Mexicali, is actually in Tecate, Mexico.

Style triumphs over any substance here, and any beer that offers label hyperbole such as “The time has come for the Ed Hardy Beer” just cannot be taken seriously. I can imagine young trendoids wearing their Von Dutch trucker caps and their Ed Hardy shirts would think that swigging from a stubbie of this would just complete the look – but I’d probably just laugh at them. Ed Hardy is named for a tattoo “Pioneer” named Don Ed Hardy. Christian Audigier licenced his tattops for use on clothing. Hmmm. 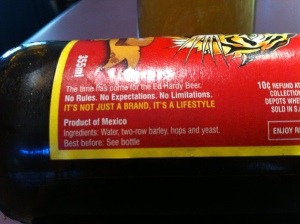 I’ve actually been to Tecate. I was one of 4 Aussies that went on a roadtrip from LA to Rosarito in Baja, Mexico. To avoid going back through Tijuana and to see some more of Mexico we drove cross country to re-enter the US of A at Tecate. We didn’t get to see much of Tecate, but did witness an all too frequent event at the border crossing. A poor bloke had his car completely torn apart – panel by panel. Not too sure whatever happened to him, but I feel sure it wasn’t his car that had its insides examined.