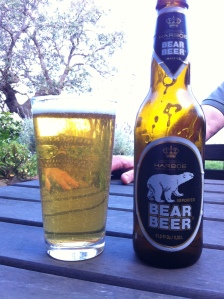 Lazy Saturday afternoon, and the heat has brought on the need for a couple of thirst quenchers. Today’s candidates, a Danish pale lager – Harboe Bear Beer and a Scottish Ale – Sheepshaggers Gold. The winner – hands down – was the Sheepshaggers Gold. A very impressive beer. The only superiority had be the Danish beer was an awesome bottle top.

Bear Beer is a very pale and light lager. The photo shows how pale it is. There’s a little pleasant bitterness, but it fades away very quickly. Nothing offensive, but nothing memorable. It is brewed by Harboe and comes from the town of Skælskør, which is on the island of Zealand, in Denmark.

The Sheepshaggers Gold is far more complex both in appearance and in taste. Not bad for a relatively new brewery. Cairngorm Brewery Company has only been going since 2001, bu they’ve go their act together. Nice label.