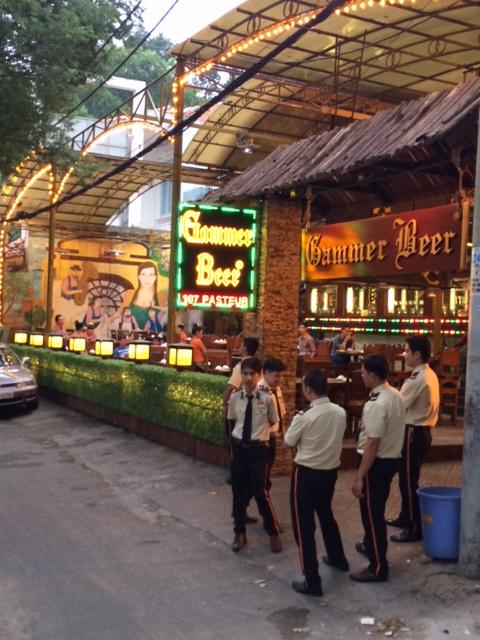 In all my travels over the years I have never been (knowingly) been ripped off or robbed. I have certainly left vital travel essentials like passports and the like in cabs, bars and buses. But this was always my own doing.

Today I let my guard down and a dirty dog “cabbie” robbed me blind. I missed all the clues. A busted meter, refusal to drop us right at hotel door (avoid CCTV), he was agitated and kept shoving a paper over my lap and wallet (ostensibly to write down the fare). While doing this he stuck his hand in my wallet and helped himself to his weeks wages.

Bastard. It’s not the cash – I am insured – it’s the fact that he got the better of me. I have forgotten the wiles of my backpacking years and was walking around in a daze. Street smarts all forgotten.

Still, I have a story to tell and have been jolted back to reality. Onwards….

Back to the beer. I made it to my first Saigon Brewery today. Gammer Beer at 107 Pasteur. Like all Saigon venues it was hideously overstaffed but the venue was pumping and I met the Gammer Beer girl (see photo). Gammer do a Blonde and a Dark. They were surprisingly good and a cut above the usual street stall Bia Ha Noi and Saigon Red. The Blonde was malty and refreshing, the Dark had a subtle toasted flavour and could hold its head high against some Aussie dark ales.